If you have ever traveled to China before, the following post might sound familiar to you. And if you’ve never been there before… well, you’ve probably heard plenty about how fascinating yet frustrating traveling there can be. So to add to the pile – my experience with a day trip to the Shilin Stone Forest of Kunming, to kick off my maiden journey back to the motherland! 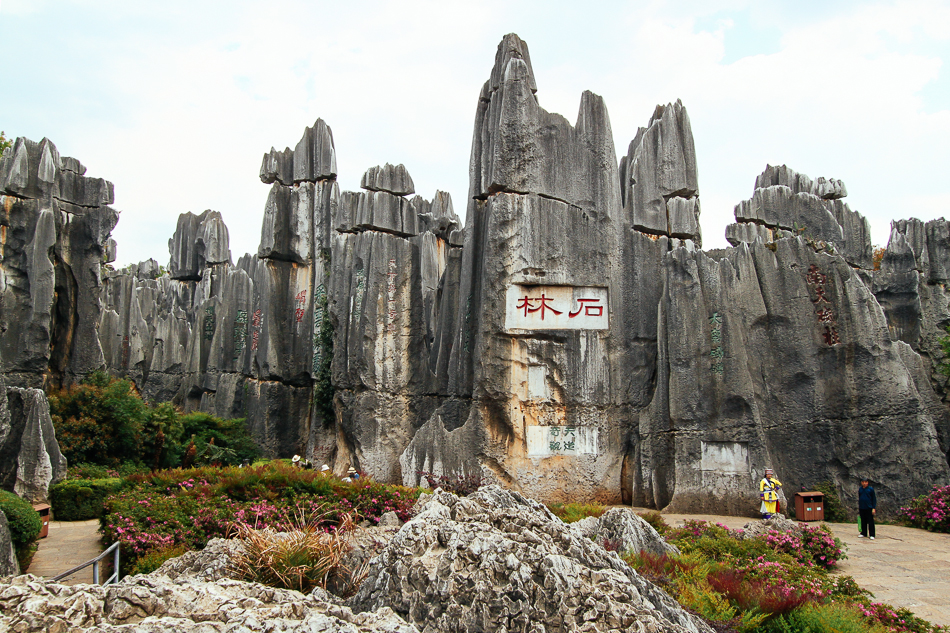 Visiting the Stone Forest was something I’d always wanted to cross off the bucket list, ever since I stumbled across articles like this and this while randomly stumbling around the Internet. However, it soon became apparent that putting the Stone Forest on my itinerary was the only thing I did right (for the Kunming part of the trip lah).

My first mistake was to go against my instincts, and book a tour to the Stone Forest from a tour agent I bumped into while trying to get a local SIM card; I usually only go for tours if there is no other way, or if it would be really difficult for me to get around otherwise, because I like taking my time to wander around and take a million photos of everything. The tour agent said it would be more convenient for me to be picked up and guided the whole way… I was tired, vulnerable, and besides, how bad could it be?

My first inkling that it might not be a day of joy, wonder and enlightenment ahead came when after about a 1-hour ride, the bus dropped us off at Tourist Moneysucker Central No. 1, a silverware shop where the sales assistants and my tour guide alike were insistent on showing us the best of silver jewellery, cutlery and sculptures (which happen to be one of Yunnan’s main exports).

But never mind. Thankfully, we got back onto the bus after 20 minutes, after which we arrived at the Yanquan Temple in the Yiliang county. I worriedly looked at my phone and noted that it was late morning, and we seemed to be nowhere near the Stone Forest yet. 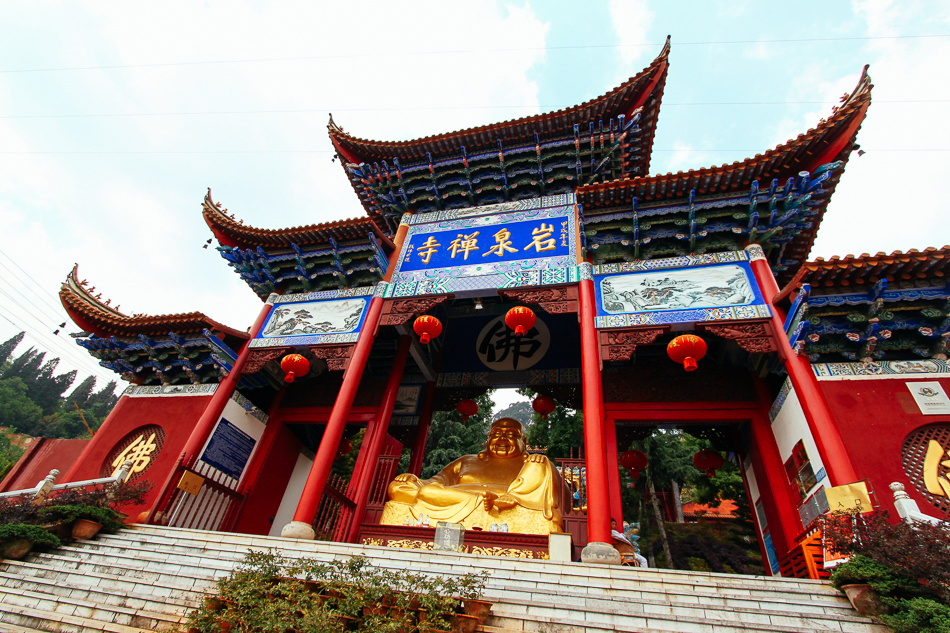 The unique thing about Yanquan Temple is that Buddhist and Taoist influences coexist in the same temple, making it one of the Eight Famous Sights in Yiliang County (I have no idea what the other seven are). Unfortunately, photography is not allowed inside the temple, so I can’t show you a lot. The temple is not overwhelmingly breathtaking anyway – while it was pleasant enough, the most remarkable spot in the temple was just the “Nine-Dragons Wall” as pictured below, the third-largest of its kind in China. 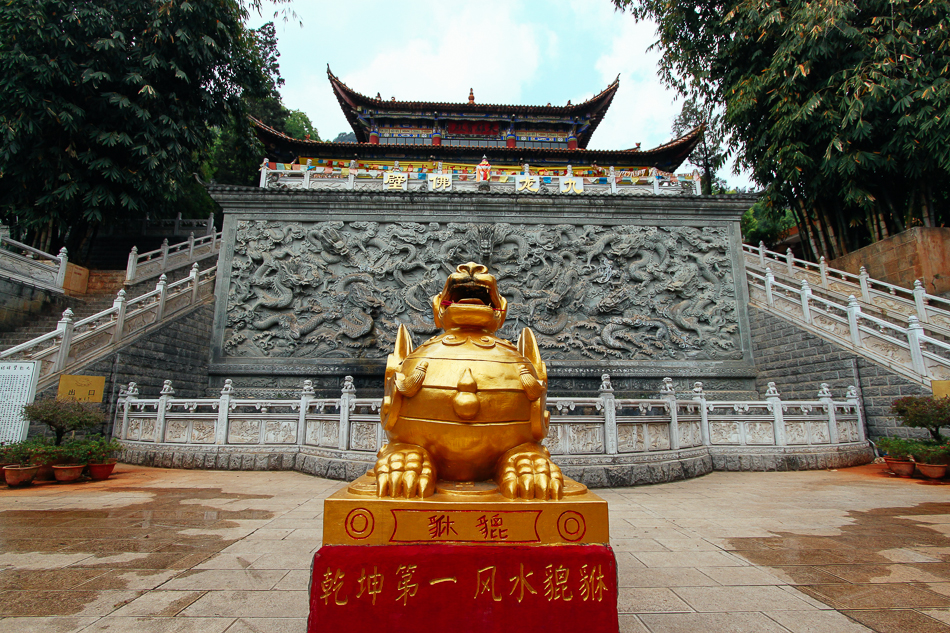 And I wish I could’ve stopped there, but noooo. After a tour of the temple, we were ushered into a room where we individually took turns to “seek blessings” from the temple monks… who then proceeded to insist on a (large) donation in return for a prayer candle. Being the peace-loving, non-confrontational cat that I am, I ended up giving the monk about 20 RMB just to get out of there 😐 And then I came back to Malaysia, only to discover after a little poking around that the same temple was once closed down due to allegations of fake monks swindling tourists out of their money -.- 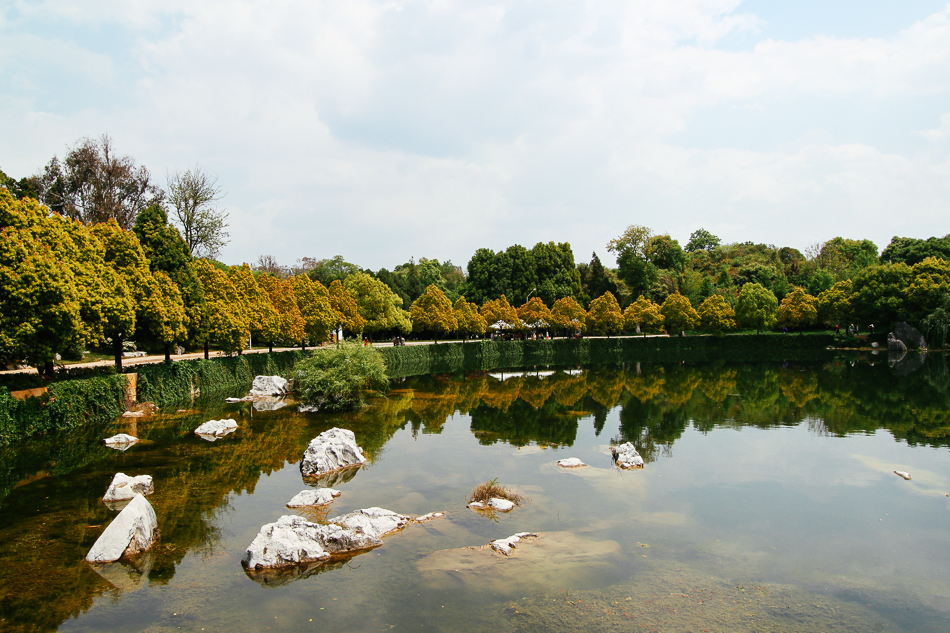 We finally arrived at Shilin Stone Forest at about 1 pm, upon which I was introduced to one of the hallmarks of Chinese tourism – electric “cars” ferrying tourists from one spot to another, because god forbid you have to walk any more than you absolutely have to. They come in variants of a minibus-like vehicle, or a sorta elongated golf buggy, like this, and can be found in most major tourist sites which involve a bit of walking. They’ll always cost you anywhere from 20-60 RMB extra on top of your entrance fee too, FYI. You didn’t expect any less, did you? 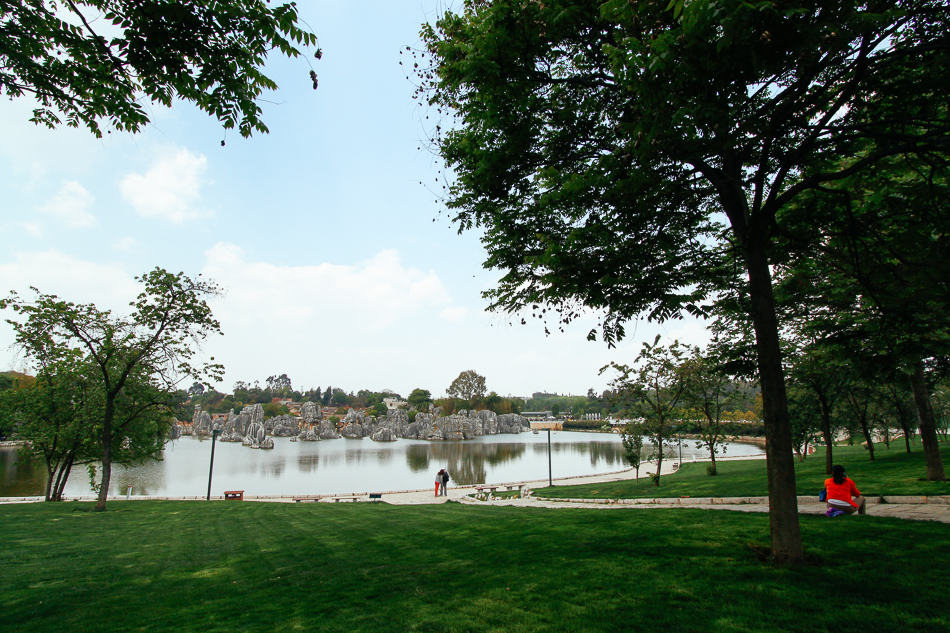 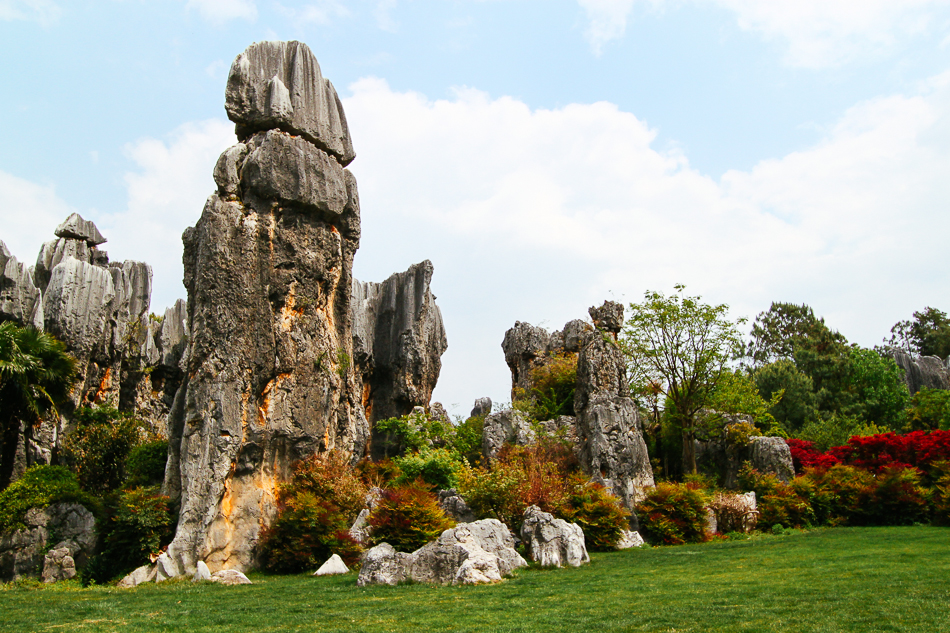 The Stone Forest is a massive park that covers about 400 square km, and is divided into several sections, like the Major Stone Forest, Minor Stone Forest and Naigu Stone Forest, all of which feature stones in various formations. Most of the park has been “touristified” with wide roads and meticulously landscaping, so it’s not exactly the untamed “forest” you might have been imagining, but it’s still a real treat to visit. 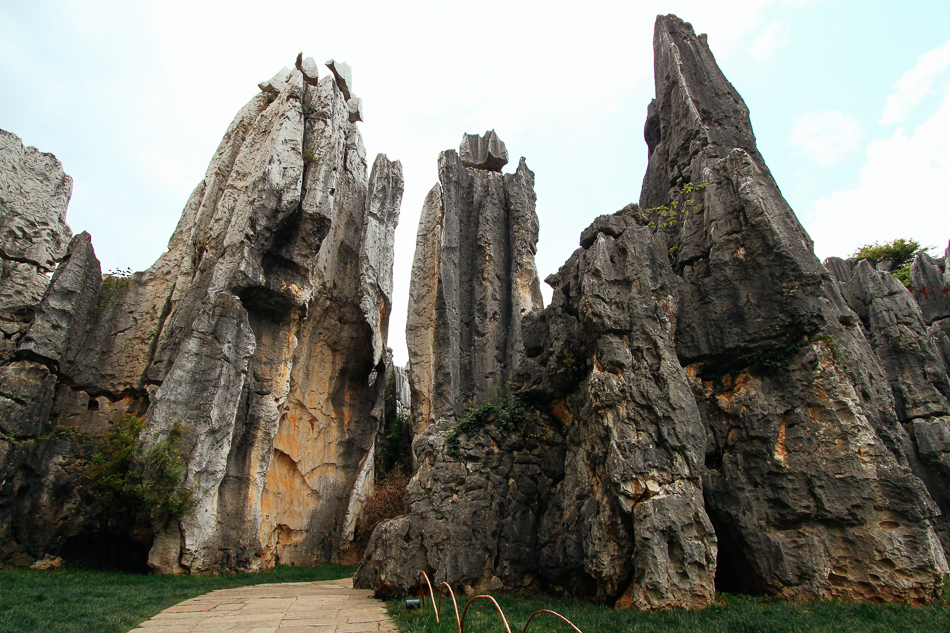 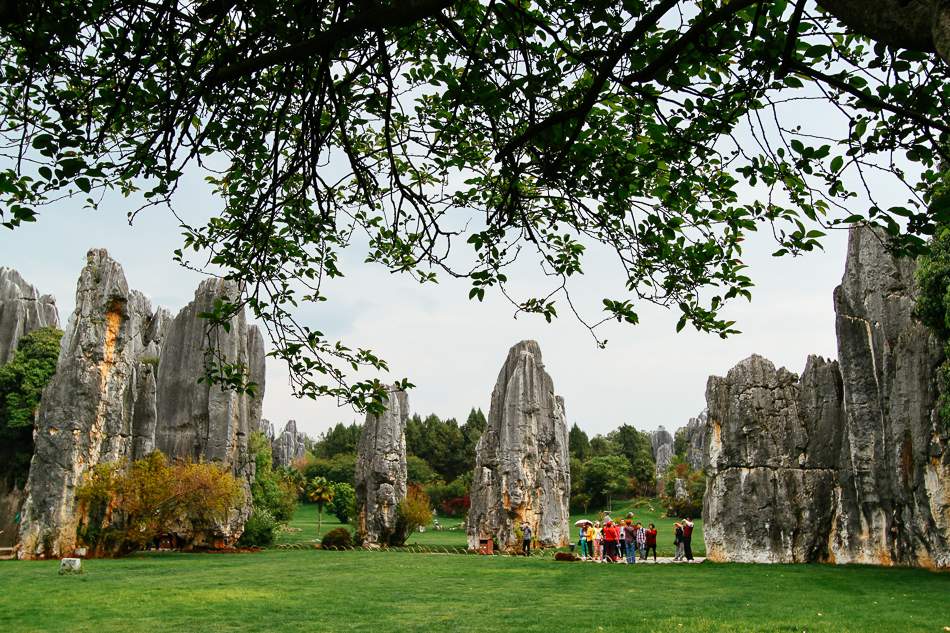 The story of how the Stone Forest was formed is one as old as time itself. Some 200 million years ago, an ancient seabed covered with limestone sediment rose to become land. Then, wind and rain slowly eroded the limestone, leaving behind the bizarre rock pillars today, some of which are nearly as tall as ten story buildings. Many of the rock formations are also said to resemble people, animals, plants and more, with a little bit of imagination, of course 😛 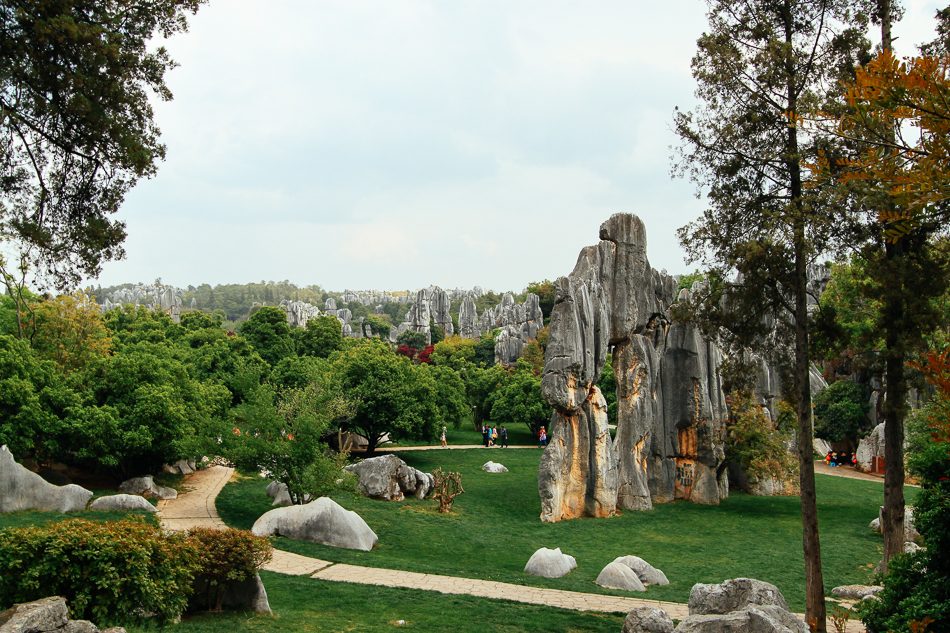 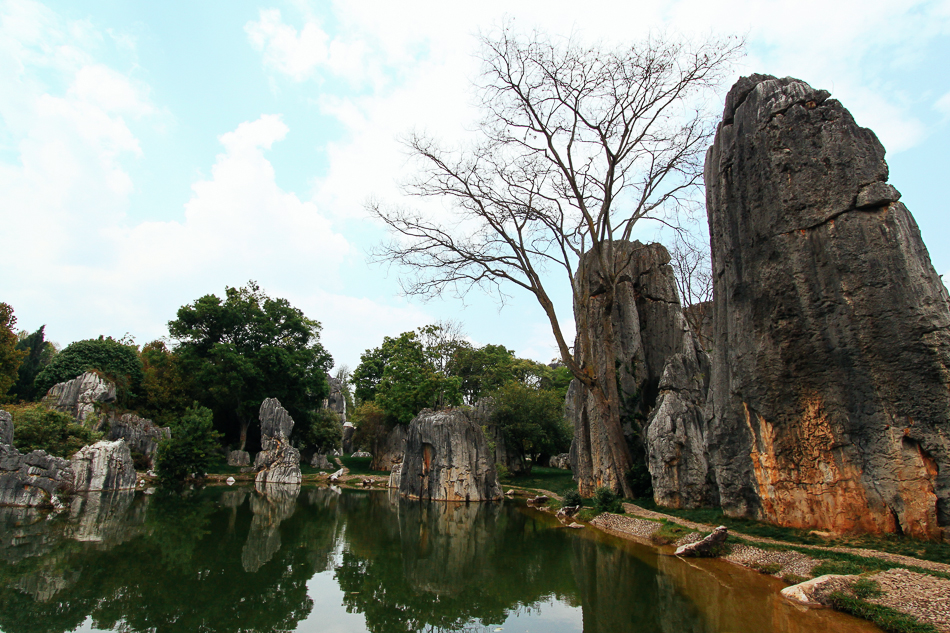 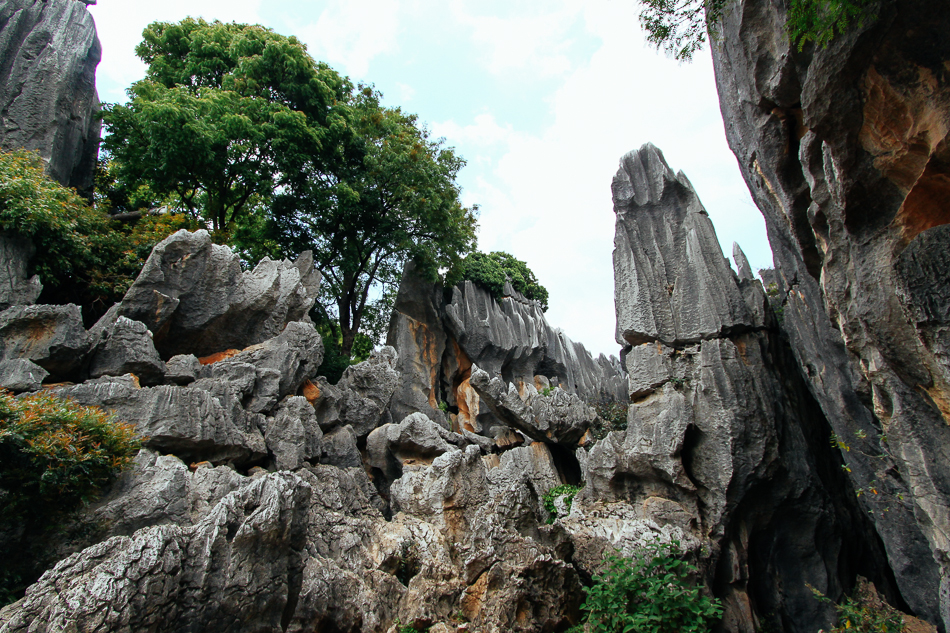 Go on and get lost, because getting dwarfed by the massive stone walls while navigating the winding pathways is pretty darn cool. 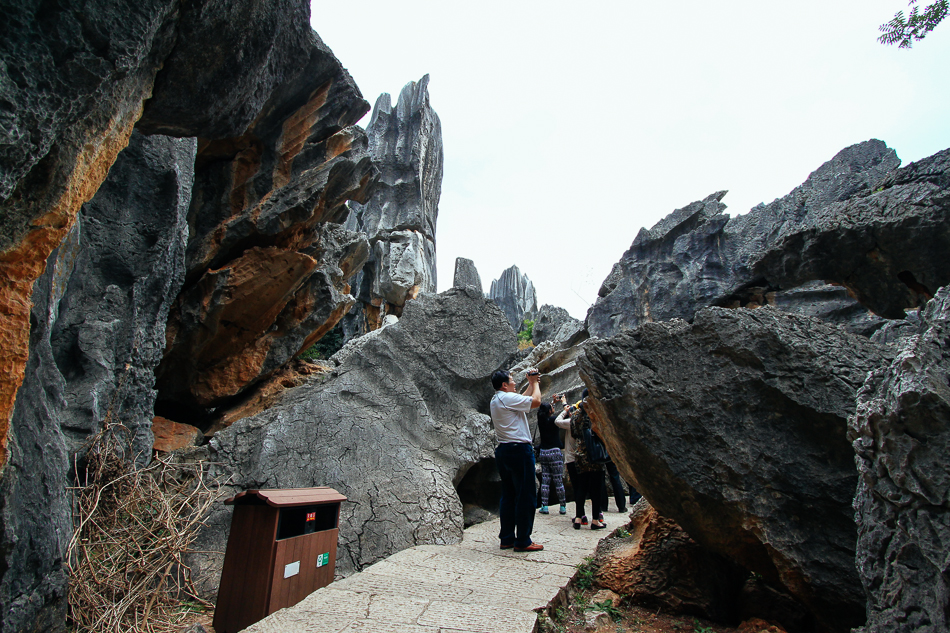 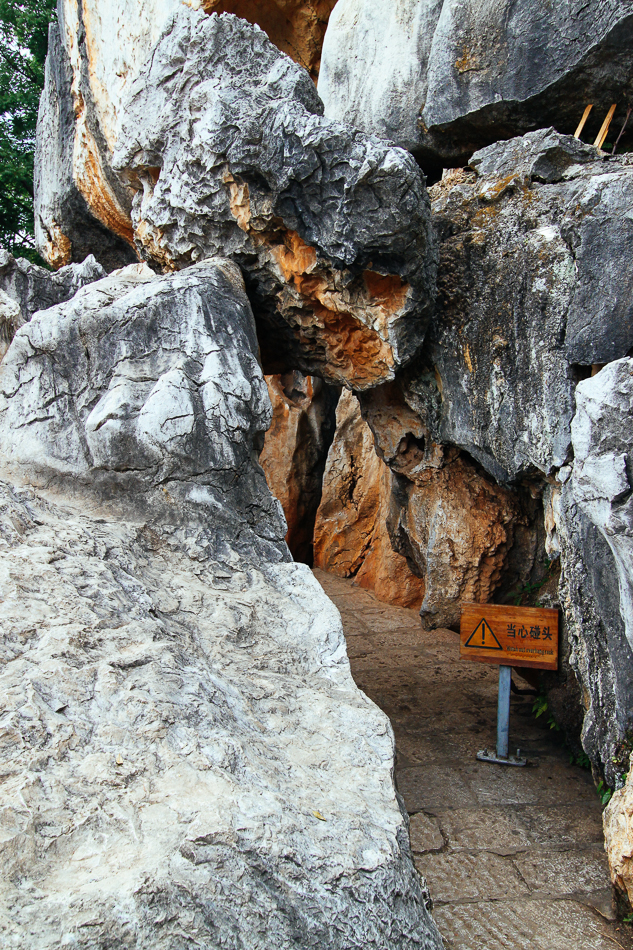 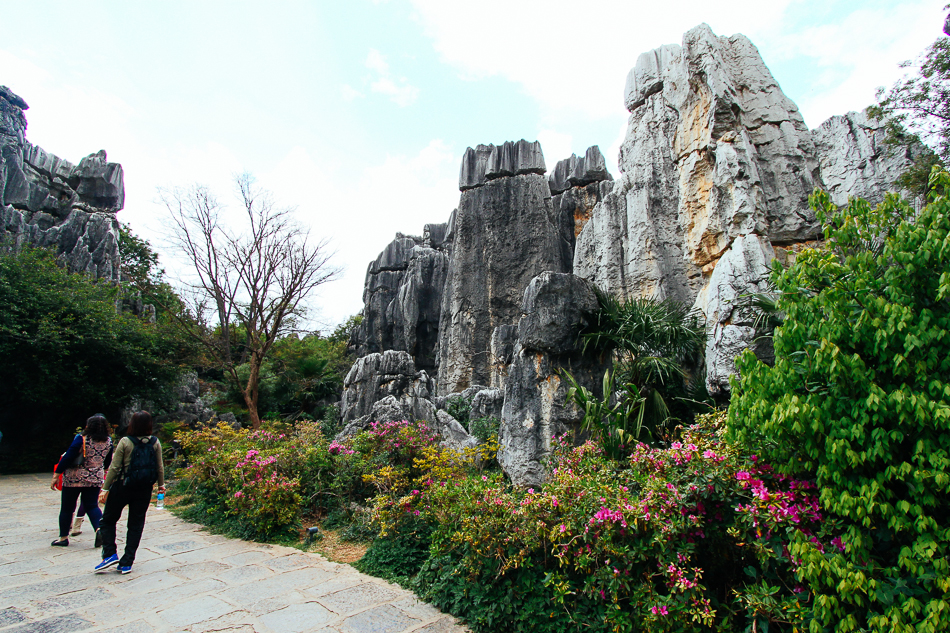 The Yi ethnic minority make up the majority of the population in this part of the Yunnan province, which is why you’ll see tribal dances performed at select locations, as well as costume rentals for photo opportunities basically everywhere throughout the park.

*The picture immediately below is where you can dress up and take a picture with the “Shilin” engraving in one of the formations (the first picture in this post), because how else would people know you’ve been to the Stone Forest?! 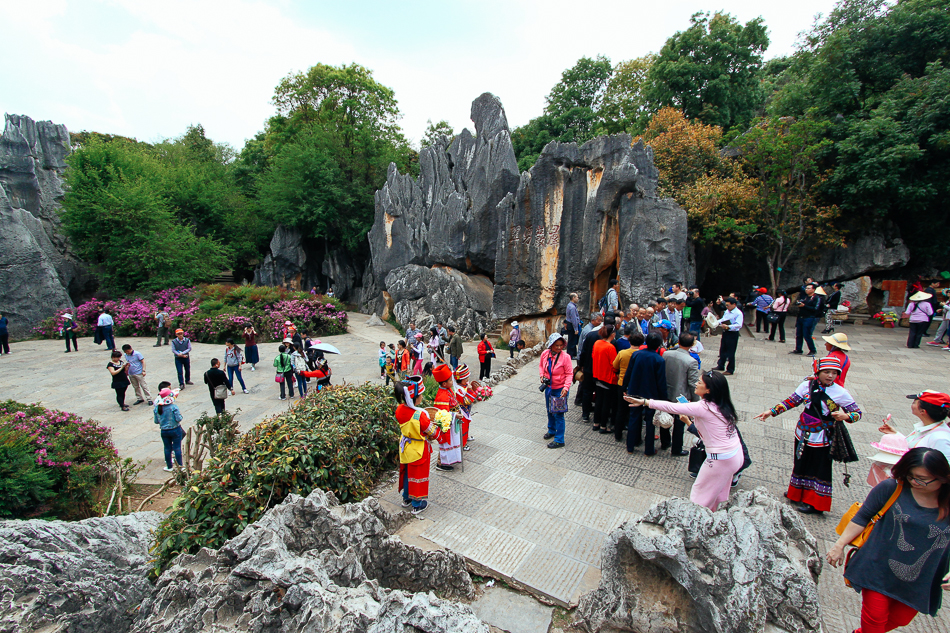 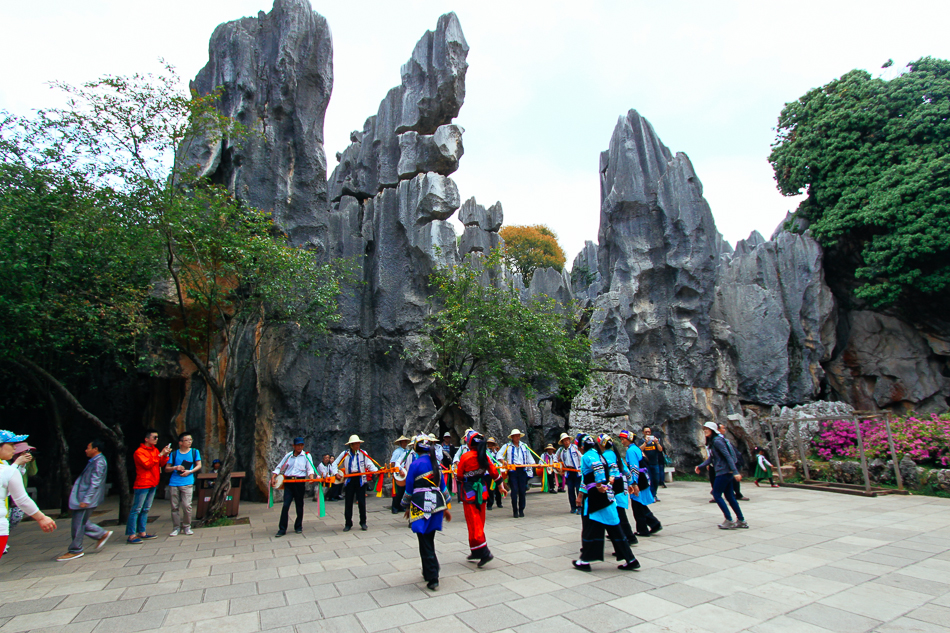 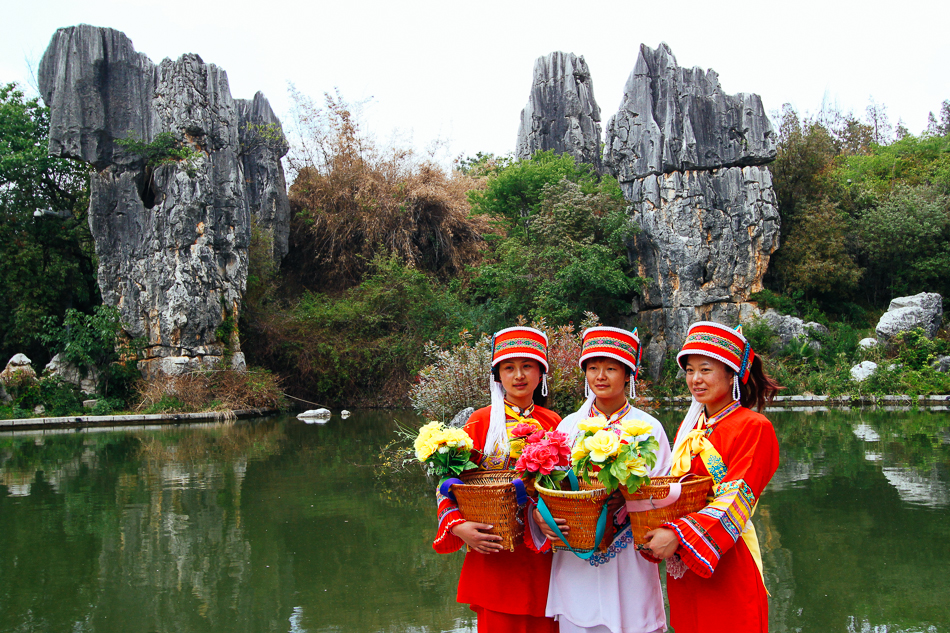 Remember the part about using your imagination with these rocks? There’s actually a legend associated with the most famous formation in the Shilin Stone Forest.

According to local folklore, there was once a beautiful maiden named Ashima, who was kidnapped by the son of an evil landlord, Azhi, and forced to marry him. The man she loved, Ahei, went to save her with his magic bows and arrows.

Ahei and Azhi competed against each other by singing for 3 days and 3 nights, and Ahei finally won by outlasting his opponent. On the way home, however, Ashima was caught in a flood and turned into what is known today as the “Ashima Rock”. The rock is said to be resemble Ashima in her traditional Yi garb and headgear, looking into the distance, with a basket on her back. Can you spot the rock? 😉 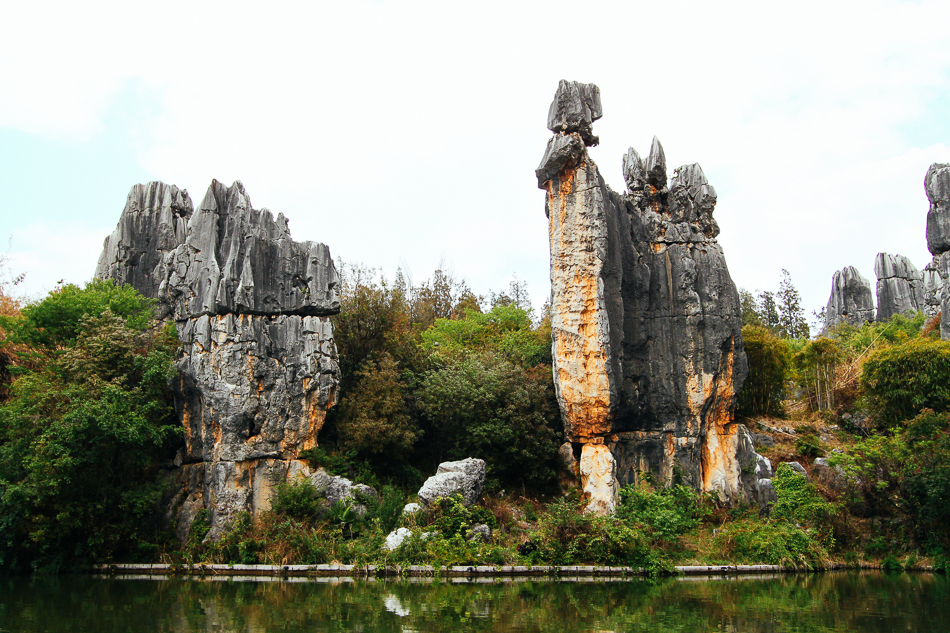 I wish I could say that that was the end to an awesome Stone Forest day trip, but all I got was a reinforcement of my conviction to not be part of group tours.

I was really looking forward to getting sweeping views of a dense “forest” like this and this, which I think would have been in the Major Stone Forest area, but we zipped past glimpses of said forests on the way to the more touristy Minor Stone Forest, where I took many of the photos above. And I thought maybe we’d get to see it after that, but after just 2 hours in the Stone Forest (which again, covers over 400 square km), we were schlepped back onto the bus… where we were transported to Tourist Moneysucker Central No. 2 – Qicai Yunnan, which was literally a complex of small malls selling everything from silverware to tea to random trinkets. The time we were allocated to part with our money there? TWO HOURS. (╯°□°）╯︵ ┻━┻

Sigh. To be clear, I absolutely recommend visiting the Stone Forest if you’re ever in Kunming – just do it yourself. The tickets are quite pricey – 175 RMB each, plus another 25 RMB for access to the electric cars (they might actually be useful for people who DO take the time to explore more of the park themselves). I don’t think it would be overly hard to go there yourself either, as I’ve read that you can take a bus from one of the Kunming bus stations to get there… which I’d have known if I had more time to do my research properly.

It looked like my China adventures were off to a shaky start, but luckily, things started to look up once I left the city for the countryside. Next up, Dali!

1 Comments on “Shilin Stone Forest & the Legend of Ashima”